Breathing is not an activity that anyone is feeling confident about right now. We spend our days covering our mouths and noses with masks, struggling to inhale and exhale. We toss and turn at night, worried that we might be feeling a cough coming on or some tightness in our chests. Covid-19 has turned us into a planet of breath-obsessed people. But as hard as it might be to fathom now, there is a silver lining here: Breathing is a missing pillar of health, and our attention to it is long overdue.

Most of us misunderstand breathing. We see it as passive, something that we just do. Breathe, live; stop breathing, die. But breathing is not that simple. How we breathe matters, too. Inside the breath you just took, there are more molecules of air than there are grains of sand on all the world’s beaches. We each inhale and exhale some 30 pounds of these molecules every day—far more than we eat or drink. The way that we take in that air and expel it is as important as what we eat, how much we exercise and the genes we’ve inherited. 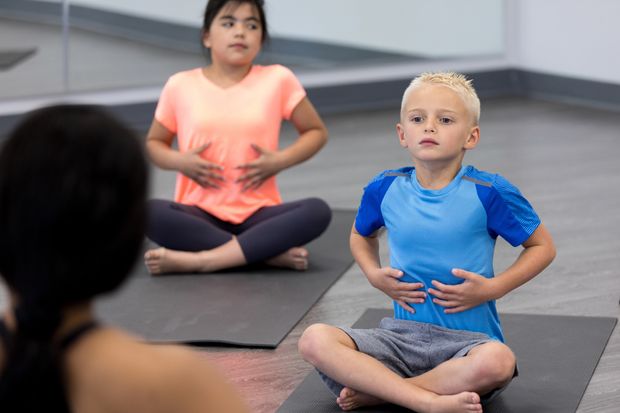 What doctors found is that breathing habits were directly related to physical and mental health. Breathing properly can allow us to live longer and healthier lives. Breathing poorly, by contrast, can exacerbate and sometimes cause a laundry list of chronic diseases: asthma, anxiety, attention deficit hyperactivity disorder, hypertension and more. Poor breathing habits can even change the physical structure of our skeletons, depleting essential minerals and weakening our bones.

The ancients understood this. Almost every major religion and many cultures—from the Greeks to the Buddhists, Hindus to Native Americans—considered proper breathing essential to health. Starting around 400 B.C., Chinese scholars wrote several books on breath, believing that it could be a medicine or a poison, depending on how we used it. “Therefore, the scholar who nourishes his life refines the form and nourishes his breath,” says a Tao text. “Isn’t this evident?”

Not really. Think back to your last health check-up. Chances are that your doctor took your blood pressure, pulse and temperature and then placed a stethoscope to your chest to listen to your heart and lungs. But she likely never checked your respiratory rate or breathing habits. And yet how we breathe affects all of these things, and much more.

Today, doctors who study breathing say that the vast majority of Americans do it inadequately.

We can blame some of our poor breathing habits on morphological changes in the human skull. Over the past 300,000 years, our mouths and sinuses have shrunk. It’s gotten so bad that today humans are the only species whose teeth no longer fit in our mouths; they grow in crooked. A smaller mouth and obstructed nose make it harder to breathe. Humans now have the sad distinction of being the most plugged-up species in the animal kingdom. We can also blame our middle-aged bodies. Starting around 30, bones in the chest become thinner and collapse inward. We lose about 12% of our lung capacity by the time we hit 50, and then the decline speeds up. We’re forced to breathe faster and harder, making it even more difficult just to catch a breath. But it’s not all bad news. Unlike problems with other parts of the body, such as the liver or kidneys, we can improve the airways in our too-small mouths and reverse the entropy in our lungs at any age. We can do this by breathing properly.

In the 1980s, researchers with the Framingham Study, a 70-year research program focused on heart disease, gathered two decades of data from 5,200 subjects, crunched the numbers and discovered that the greatest indicator of life span wasn’t genetics, diet or the amount of daily exercise, as many had suspected. It was lung capacity. Larger lungs equaled longer lives. Because big lungs allow us to get more air in with fewer breaths. They save the body from a lot of unnecessary wear and tear. That’s the first step in healthy breathing: extending breaths to make them a little deeper, a little longer. Try it. For the next several minutes, inhale gently through your nose to a count of about five and then exhale, again through your nose, at the same rate or a little more slowly if you can. This works out to about six breaths a minute.

When we breathe like this we can better protect the lungs from irritation and infection while boosting circulation to the brain and body. Stress on the heart relaxes; the respiratory and nervous systems enter a state of coherence where everything functions at peak efficiency. Just a few minutes of inhaling and exhaling at this pace can drop blood pressure by 10, even 15 points.

By building healthy breathing habits we can stop the entropy of our respiratory systems and increase our lung capacity. We can also reduce—or in some remarkable cases, reverse—modern maladies such as asthma and allergies and even emphysema and autoimmune diseases.

Last year, I wanted to see just how dramatically breathing habits—good and bad ones—could affect my own brain and body. I’d learned that up to 50% of us are chronic mouth breathers, a problem well described by an ancient Tao text: “The breath inhaled through the mouth is called ‘Ni Ch’i, adverse breath,’ which is extremely harmful.” Scientists have known for decades that inhaling through this pathway saps the body of moisture, irritates the lungs and loosens the soft tissues at the back of the mouth. Mouth breathing has also been linked with neurological disorders, periodontal disease and increased risk of respiratory infection. But nobody knew how quickly this damage came on. Working with Dr. Jayakar Nayak, chief of rhinology research at Stanford’s Otolaryngology Head and Neck Surgery Center, I spent 10 awful days with silicon plugs up my nose, breathing only through my mouth. Within a single night, my formerly minimal snoring increased 13-fold. I suddenly had sleep apnea. My blood pressure shot up to stage 2 hypertension while my stress levels spiked and cognitive scores plummeted. I felt anxious, stressed, fatigued.

Within a day of switching back to nasal breathing, my snoring began to revert and soon was almost gone. I went from having two dozen sleep apnea events a night to zero. My blood pressure dropped 20 points from its peak. The other subject in the experiment suffered the same damage from mouth breathing and the same restoration from nasal breathing.

Which brings us to the second step in healthy breathing: Breathe through your nose. Nasal breathing not only helps with snoring and some mild cases of sleep apnea, it also can allow us to absorb around 18% more oxygen than breathing through our mouths. It reduces the risk of dental cavities and respiratory problems and likely boosts sexual performance. The list goes on.

Covid-19 has forced modern medicine to broaden its outlook and look for new solutions, even in the wisdom of the past. Fortunately, a remedy for many of our chronic health problems is right under our noses. It requires no batteries, Wi-Fi, headgear or smartphones. It costs nothing and takes little time and effort. It’s a therapy our ancestors self-administered for thousands of years with only their lips, noses and lungs. Let’s hope that this time around we don’t forget it.

—This essay is adapted from Mr. Nestor’s new book, “Breath: The New Science of a Lost Art”